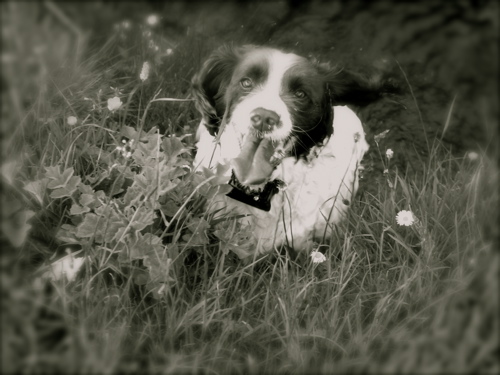 Remember this lovely springer spaniel from the beginning of our journey? It turns out that scientists agree with us that non-human dreamers, like this lovely 4-legged, have a rich dream life.

This topic often captures our attention and has appeared in several previous posts such as here and here.

You can listen to some of our musings about animals dreaming at these previous posts, Fisherfolk Dreaming and Dream Food Vision.

So, according to scientists (as represented on Wikipedia’s dream page), “Sleeping and dreaming are intertwined….REM sleep and the ability to dream seem to be embedded in the biology of many organisms that live on Earth. All mammals experience REM. The range of REM can be seen across species: dolphins experience minimum REM, while humans remain in the middle and the opossum and the armadillo are among the most prolific dreamers.”

Apparently there have been studies that have “observed dreaming in monkeys, dogs, cats, rats, elephants and shrews [and] ….There have also been signs of dreaming in certain birds and reptiles.

Here is another interesting twist offered on Wikipedia:

In 1954 the theta rhythm was discovered by two scientists at the University of California at Los Angeles when experimenting with rabbits, shrews, moles and rats. The theta rhythm is the oscillatory pattern of electric activity in the brain. [Interesting discovery, but the idea of experimenting on animals makes me cringe!] This discovery lead to a commentary published in 1972 that explained differences in Theta Rhythm where defined by respective animal behaviors. Awake animals showed high Theta Rhythm when behaving in ways that where crucial to their survival, for example: eating and reproducing. This apparently was a response to a changing environment. The theta rhythm occurs during REM and studies suggest it “reflected a neural process whereby information that is essential to the survival of the species” is gathered throughout the day and is “reprocessed into memory during REM sleep”. In conclusion: “dreams may reflect a memory-processing mechanism inherited from lower species”.

Some scientists argue that humans dream for the same reason other mammals do. From a Darwinian perspective dreams would have to fulfill some kind of biological requirement or provide some benefit for natural selection to take place. Antti Revonsuo, a professor at the University of Turku in Finland, claims that centuries ago dreams would prepare humans for recognizing and avoiding danger by presenting a simulation of threatening events. This threat-simulation theory was presented in 2000.

This makes sense in a way, as we humans are in fact mammals. But how, I wonder, does this theory fit into modern human dreaming patterns? If dreams served to prepare us for danger in the past, what purposes do they serve now?

If you would prefer a religious/spiritual perspective over science, here is another take:

“God sleeps in stone, breathes in plants, dreams in animals, and awakens in man”
– Hindu Proverb 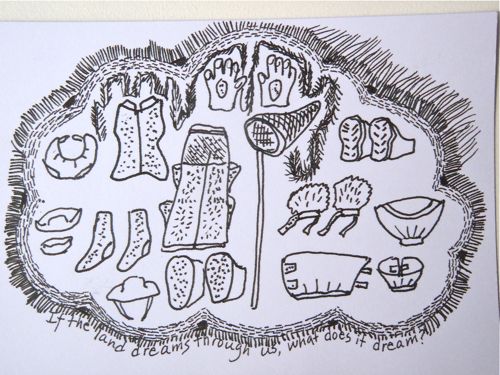 About peat, turf and bog

adds spring to your step 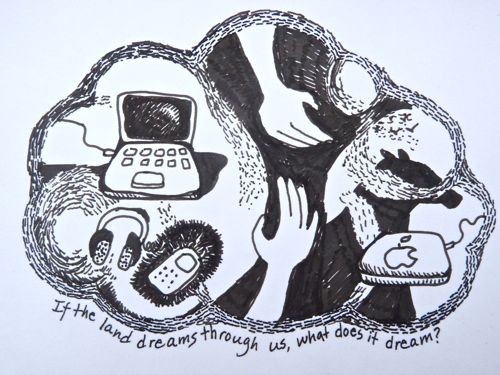 Our dream of making some of the audio footage we recorded during our travels through the Marble Arch Caves Geopark into a 30-minute radio feature is becoming reality….We are hard at work on our radio show, Anna in Devon and Claire in New Mexico, listening to footage, comparing notes, editing and stringing sounds together. The show is forming roots, taking shape and growing and changing in the process, much like potatos growing underground.

Listen below to a description of ideas for DREAMING PLACE radio, as described to Ignatius Maguire during our tour of his traditional farm, his potato fields and the special pot designated for potato washing:

Since this was recorded, we have had oodles of ideas and time in front of the computer editing. We are very excited to share the results with you. We plan to post “preview” segments of the upcoming radio show here on the blog and we would love your feedback. Tell us what you think!

When the first DREAMING PLACE radio show is finished we will of course let you know when and where it will be aired so that you can tune in on your radio or via live streaming online.

We climbed in the wide branches of two famous, ancient, entwined male and female Yew trees on the Crom estate. They are reputedly the oldest Yew trees in Ireland and possibly in all of Europe. According to the National Trust website, the trees were planted in the 17th Century, but other websites proclaim the trees to be much older – as many as 800 years.

The Yew Tree is now a rarity in Ireland, but the tree still has a mythic cultural prominence. Rich in mythology, symbolism and historic and prehistoric cultural uses, Yew trees are shrouded with mystery and power. The large, majestic trees have a commanding presence, not least because all parts of the Yew tree contain poisonous alkaloids, except for the bright red arils encasing its seeds.

As we climbed, swung and perched in the grand branches of the trees,  we mused about the dreams shared and the hundreds of years of history witnessed by the arboreal pair. What do Yew trees dream of? How many dreamers have taken refuge in the protection of these trees and which of their dreams were caught in the great web of their branches?

We are sure that dreams and yew trees are tied up together somehow and here is a bit of proof. Read about a Yew dream from the 1600’s “Somnium ex Eubernea porta” from Mrs. Cl., of S. here.

For more information about Yew trees visit the Ancient Yew Group at  www.ancient-yew.org. 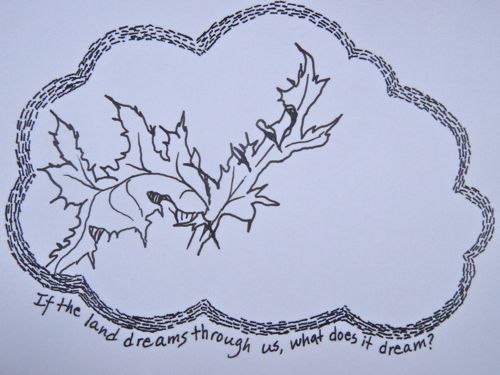 What is your dream egg? *audio*

In some ways, dreams are like eggs. After they are “laid”, given time, the right conditions, care, attention and incubation, they may hatch! The New Year is an apropos time to identify and reflect on one’s Dream Egg(s). We’d love to hear about them! (Dream Eggs can be shared in the comments field below.)

During our traveling residency in the MAC Geopark we embarked upon a dream “egg hunt”, a detective game of sorts to find dreams hiding in unexpected places.

Margaret Gallagher shared this beauty of a dream with us over a lovely breakfast at her thatched cottage.

Listen below to hear about her “dream egg” close at hand: